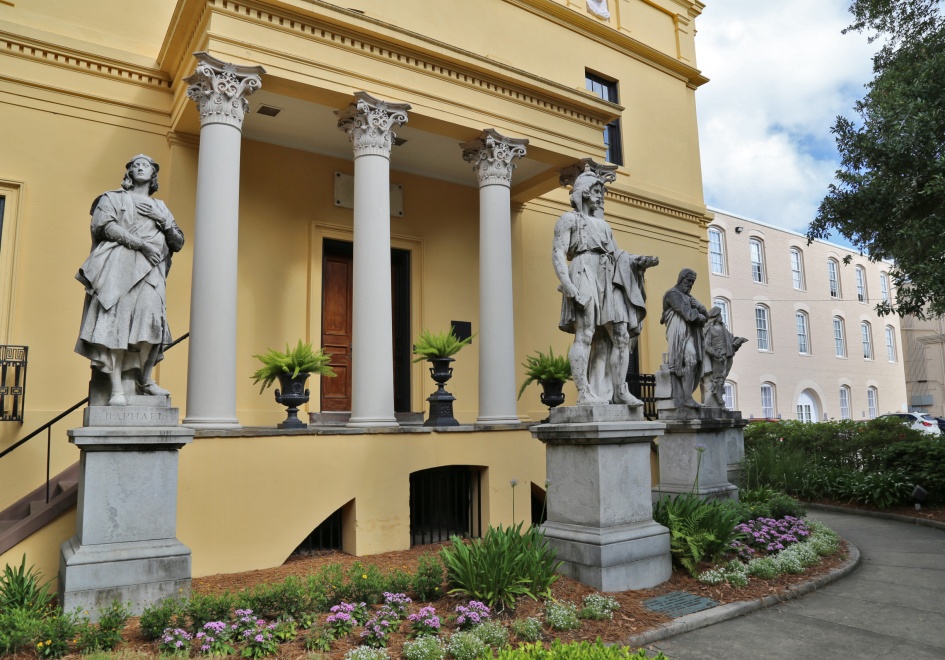 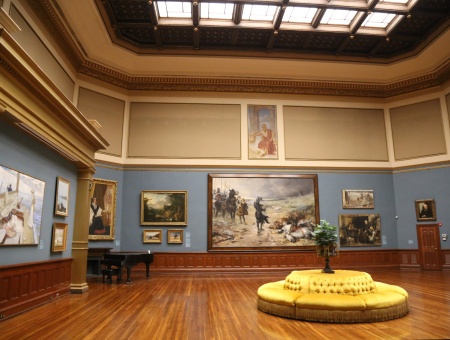 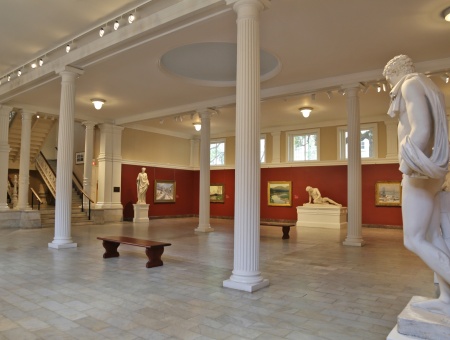 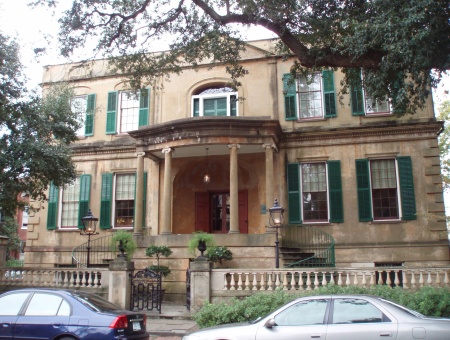 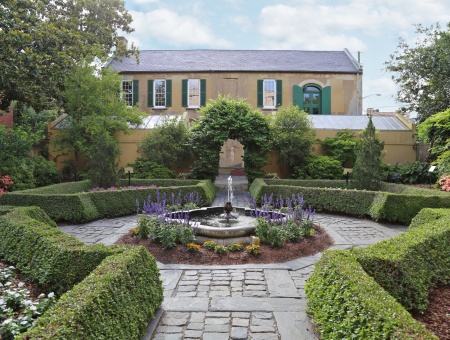 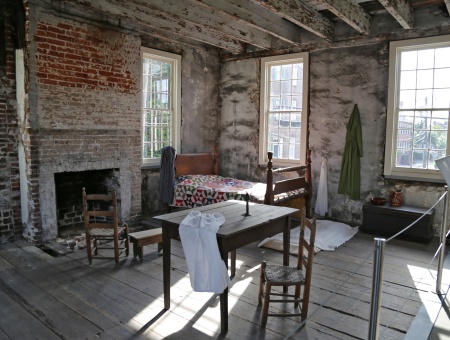 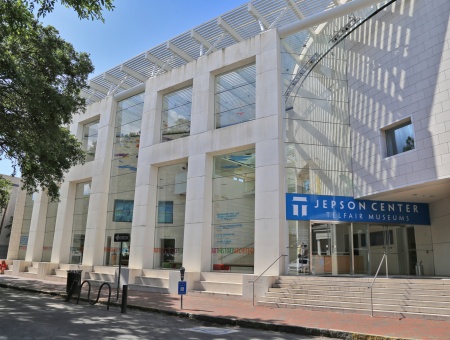 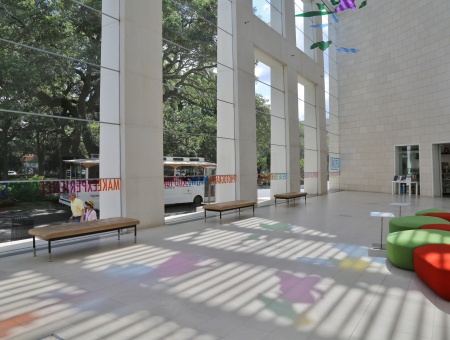 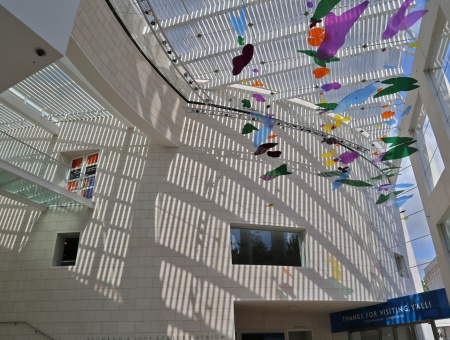 When scouting for architectural treasures in the downtown area, productions are frequently awed by the Telfair Museum’s three distinct properties. The Telfair Academy, Owens-Thomas House & Slave Quarters, and the Jepson Center for the Arts comprise the oldest public art museum of the South. Each building houses pieces that correspond to the building’s era of construction, with an impressive collection of over 4500 works between them.

By 1939 Bill Brady, who had inherited the neighboring The Telfair Academy was designed by British architect William Jay for Alexander Telfair, a prominent member of the distinguished Telfair family. Constructed in 1818, the neoclassical Regency style home was eventually inherited by Alexander’s sister Mary who bequeathed the property and furnishings to the Georgia Historical Society to be opened as a museum.  After a renovation, the expanded Telfair mansion opened to the public in 1886 as the Telfair Academy of Arts and Sciences. The two-story stucco mansion is home to three preserved nineteenth-century period rooms, including a unique octagonal drawing room; a round-ended dining room; a grand staircase; sculpture gallery; and rotunda. Located on the west side of Telfair square, the museum takes up an entire city block. The museum’s four-columned portico is flanked by stairs on each side and faces east to the square, with it’s classically Greek and Roman inspired entablature repeated throughout the building. Five limestone sculptures of master artists – Michelangelo, Phidias, Rubens, Rembrandt, and Raphael – stand guard at the museums entrance, each figure towering over 7ft tall.

In 1951 the Telfair was bequeathed yet another mansion designed by William Jay, The Owens-Thomas House. The English Regency design is considered one of the best examples in the nation and is considered one of the most sophisticated of its time – having one of the first indoor plumbing systems in the United States. Facing Oglethorpe square, the two-story tabby and limestone structure sits back from the street behind a short balustrated wall and has a curved double staircase under its four-columned portico. The exterior has a unique serpentine Iconic portico and an imported cast-iron Corinthian veranda with acanthus scroll supports on the southern façade.
The interior has many unique features including restrained fenestration, favoring indirect light; curved walls; columnar screens; statuary niches; a grand staircase and curved walkway bridge; remarkable plasterwork; and carved and gilded Corinthian entablature throughout. The basement has been completely restored as a kitchen, laundry and wine cellar and houses an exhibit of domestic antiquities found on the property. A formal parterre garden separates the house from the original carriage house that is one of the earliest intact urban slave quarters in the South. The slave quarters also holds the title of having the largest example of haint blue paint applied by the enslaved inhabitants of the time period.

The two National Historic Landmark buildings adopted the name Telfair Museum of Art in 1995 to refer to both buildings. By 1998, The Telfair Museums launched a capitol campaign to construct a modern art museum just south of the Telfair Academy on Telfair square. Designed by architect Moshe Safdie, the plans were strikingly modern for the historic district and endured a two-year review and revision process with the Savannah Historic District Board of Review to ensure an appropriate design for the location. The contemporary design features a large glass atrium and grand staircase. The building’s façade and major interior walls are a white Portuguese limestone. Overhead a trellised glass and steel structure casts long shadows onto the foyer walls and floors below. The building is home to 6 exhibition galleries, an auditorium, rooftop sculpture garden, interactive children’s museum, and state-of-the-art storage facilities among other amenities.

In 2009 the name Telfair Museums, referring to all three sites, was adopted. The museum’s trio of properties have all had their time on the silver screen. The Owens-Thomas house has served as a backdrop for several period pieces as far back as Roots in 1977, while the Telfair Academy made its debut last year with Amazon’s limited series, The Underground Railroad. The most recent screen credit goes to The Jepson Center, which recently doubled as a modern-day courthouse in Hulu’s The Girl From Plainville. Executive Producer Patrick Macmanus, gushed about the production’s experience saying, “Another wonderful location that we used was the Jepson Center. The Jepson Center is part of the Telfair Museums – there are three museums. It’s a stunning, modern, sleek building that we used as the Taunton District Court… But when you are not filming there, it is a phenomenal art museum. And so again going back to ‘why Savannah?’ the culture of Savannah was phenomenal, and those Telfair museums were top of the list.”